Bollywood and Lollywood are the names of the Indian and Pakistani film industries, respectively. The stars on both sides of the border are incredibly brilliant and fashionable. When they participate in photo shoots for international magazines, both of these celebrities are occasionally spotted donning the same attire. Other times, they commission overseas designers to create their outfits. There have also been instances where Pakistani celebrities have sported outfits created by Indian designers that have either been spotted on the runway or being worn by another Indian celebrity. There are also instances when it appears that specific celebrities are inspired by one another. Other times, there are some famous worldwide designers who most likely desire that the stars on both sides wear their outfits. Fans and followers frequently compare the appearances when superstars from both sides of the border are spotted wearing the same clothing. Fans often find it entertaining to see these celebs compete in fashion. It demonstrates how Bollywood and Lollywood superstars can share similar taste in clothing. Similar fashion face off has occurred between Indian Model/ actress Sonam Bajwa and Pakistani actress Hania Aamir as both of them were spotted wearing similar outfit designed by Hussain Rehar 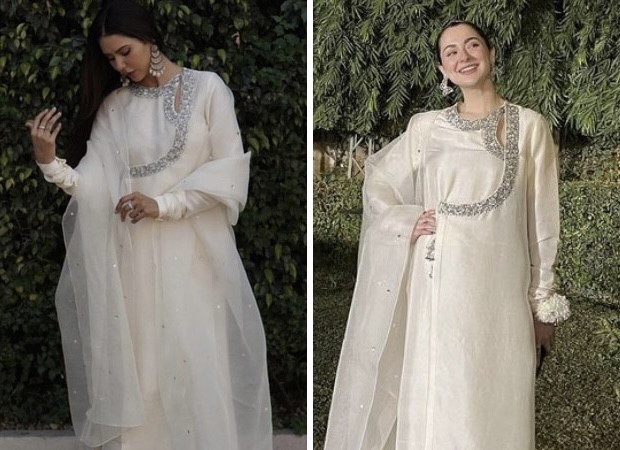 For fashionistas, Sonam Bajwa’s Instagram page is a delight. The Punjabi cinema actress never fails to impress her fans with her wardrobe choices, whether they are simple or glitzy. She is lovely in her most recent Instagram photos wearing an ivory raw silk shirt with chooridaar sleeves and an angrakha-style neckline that is totally adorned with intricate silver dabka, cutdana, nakshi, and sitara work. It has an organza dupatta with chatta of silver sitara all over it and an ivory Indian raw silk chooridaar. Her hair and makeup are the epitome of basic chic, perfectly enhancing the suit’s attractiveness. Even more flawless finishing touches included Punjabi juttis and silver hefty jhumkas. No matter what she wears, Sonam Bajwa’s style always commands attention with little to no effort.

There’s something about dimples that instantly tugs at your heart and dimple girl, Hania Amir has come a long way in a short span of time. Hania has a lovely face, and she looks well in all hues and attire. She chose a similar attire to Sonam’s for a friend’s wedding as well. Hania chose a pair of lovely butterfly earrings to enhance her appearance. Her middle-parted hair looked great tied back in a tidy knot for a sleek hairstyle. Her ethnic aspect is made more beautiful by the gajra on her wrist. She had glossy lips and kohl-rimmed eyes for her makeup.