Gucci kicked off Milan fashion week on Friday with a lineup of slouchy, androgynous menswear styles, forging ahead with its latest collection while the industry waits for owner Kering to name a new designer for the label.

French luxury group Kering faces pressure to quickly find a replacement following the abrupt departure in November of Alessandro Michele, the flamboyant designer who was a favourite of Harry Styles and Lady Gaga, and reignite sales growth at its largest brand, which accounted for two thirds of profits in 2021.

The question of who will steer Gucci’s creative direction loomed over the megabrand’s first men’s show in the Italian fashion capital in three years. Events run through Jan. 17, drawing an audience that includes major retail buyers sizing up which styles might be future top sellers. A model presents a creation at the Gucci menswear show in Milan, Italy. (REUTERS/Alessandro Garofalo)

Show notes, which buyers scrutinize for signs of the label’s next steps, referred to improvisation and collaboration.

“When the free impulses of individual minds interweave, collective expressions are conceived,” the brand’s notes said.

Shimmery silver pants and quilted motorcycle boots added touches of flamboyancy to the neutral-colored looks, which were taken in by celebrities in the audience including K-pop star Kai, American football player Jalen Ramsey and Italian rock band Maneskin.

UBS expects Kering’s Feb. 15 earnings release will show the label’s fourth quarter sales declined by around 11%, likely one of the more pronounced slowdowns among the world’s top fashion labels, as strict COVID-19 restrictions weighed on business in China.

“The longer the wait for a new Gucci creative director, the worse the outlook for Kering,” said Luca Solca, analyst with Bernstein, noting that “more of the same” would not help the label regain its relevance with shoppers.

Analysts at HSBC, meanwhile, said efforts taken before Michele’s departure could ease the transition, predicting improvement this year regardless of who takes up creative direction. They pointed to a recent emphasis on timeless fashions and higher-priced products as well as a ramp-up of marketing spend and an increase in the number of collections as likely serving to accelerate business.

Gucci held back on marketing investments during the pandemic, while larger rival LVMH’s two biggest labels Louis Vuitton and Dior pushed ahead, a move that analysts say helped them gain ground on rivals. 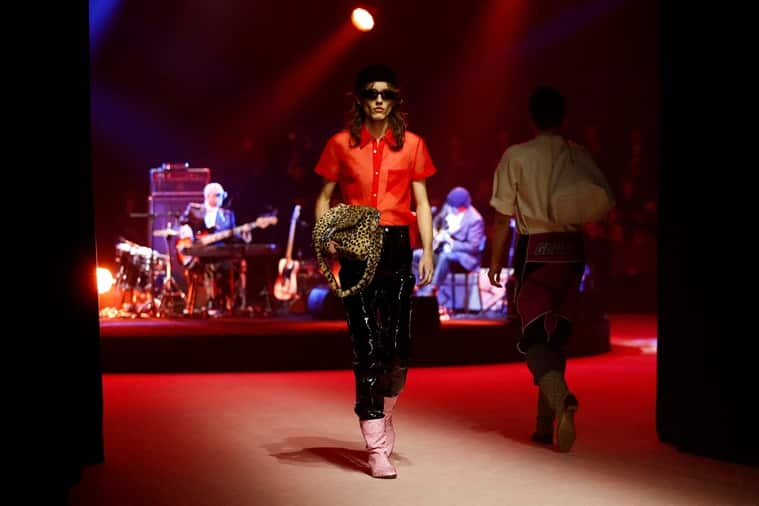 A model presents a creation at the Gucci Fall/Winter 2023/2024 menswear show in Milan, Italy.(REUTERS/Alessandro Garofalo)

Kering’s other, smaller fashion houses Saint Laurent, Bottega Veneta and Balenciaga had been growing strongly heading into the end of last year, but Balenciaga got caught up in controversy after a holiday ad campaign drew accusations of inappropriate imagery with children. Despite the current turbulence at Kering, however, expectations are high given the group’s strong track record nurturing brands, analysts say.

The group’s brands are known for “capturing the Zeitgeist” noted Solca, who said Gucci’s past success was “the most impressive turnaround story in luxury history.” The industry is also expecting big changes at other blockbuster labels.

Top management changes at Louis Vuitton and Christian Dior announced this week prompted talk that a design team reshuffle could follow, including at Louis Vuitton’s menswear division, which has leaned on design studio team since the death of creative director Virgil Abloh in late 2021.