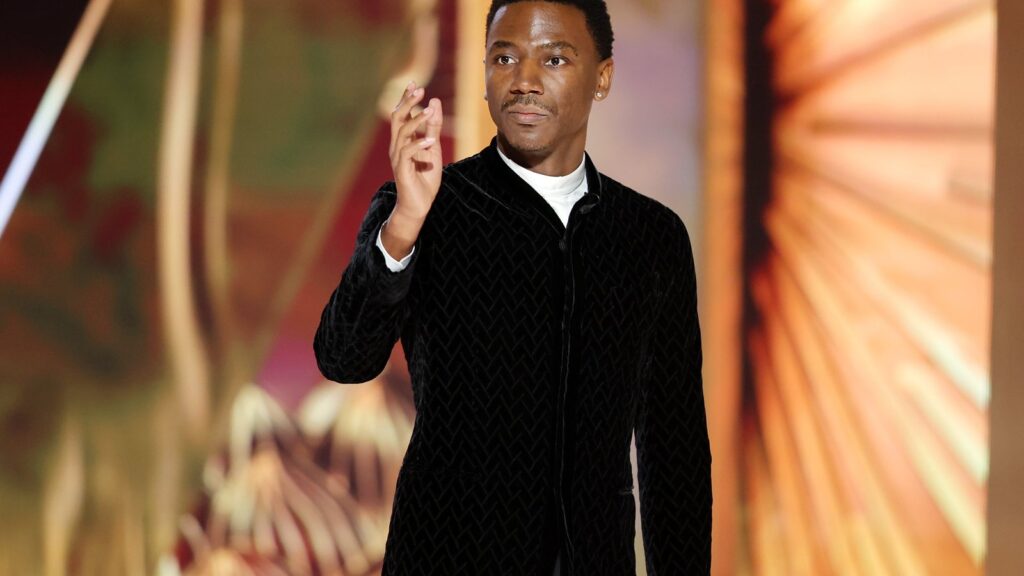 Following a series of high-profile controversies, from the revelation that it had no Black members among its ranks to allegations of bribery — including an extraordinarily shameless luxury press trip to Paris courtesy of Netflix that ended in a number of nominations for Emily in Paris — the Hollywood Foreign Press Association’s Golden Globe Awards returned to television on Tuesday night.

The 80th edition of the awards show was, of course, booted off the airwaves last year (and relegated to Twitter) after the aforementioned controversies came to light, and this one saw Best Actor nominee Brendan Fraser, star of The Whale, sit out the ceremony in protest, owing to his allegation that former HFPA president Philip Berk had groped him.

Host Jerrod Carmichael, one of the most talented stand-up comedians alive — and the first Black host in the show’s long history — didn’t address the Philip Berk cloud hanging over the proceedings, but he did dive headfirst into the race controversy during his opening monologue.

“Hello. Welcome to the 80th annual Golden Globe Awards. I am your host, Jerrod Carmichael. And I’ll tell you why I’m here. I’m here ‘cause I’m Black,” he began.

He continued: “This show, the Golden Globe Awards, did not air last year because the Hollywood Foreign Press Association — which I won’t say they were a racist organization, but they didn’t have a single Black member till George Floyd died, so do with that information what you will.”

Carmichael then sat down on the steps of the stage, similar to his extraordinary HBO stand-up special Rothaniel, and broke down why he decided to host the show. He said that when he was offered the gig, which was once again broadcast from The Beverly Hilton hotel in Los Angeles, he called his pal Avery, who asked how much they were paying him. Carmichael told them the number: $500,000.

“Boy, if you don’t put on a good suit and take them white people money,” his pal replied.

“Where I’m from, we all live by a strict ‘take the money’ mentality,” Carmichael explained. “I bet Black informants for the FBI in the Sixties, their families were still proud of them. They were like, ‘You hear about Clarence’s new job? They’re paying him eight dollars an hour to snitch on Dr. King! It’s a good government job!”

The comic revealed that he turned down several meeting requests from HFPA President Helen Hoehne, a white German journalist, who wanted to talk to him about “changes the organization has made with regards to diversity.”

“I took this job assuming that they hadn’t changed at all. At all,” joked Carmichael. “I heard they got six new Black members. Congrats to them, whatever. Sure. That’s not why I’m here. I’m here, truly, because all of you — I look out into this room and I see a lot of talented people… and regardless of whatever the Hollywood Foreign Press Association’s past may be, this is an evening where we get to celebrate. And I think this industry deserves evenings like these.”

Welcome to the Apocalypse – Rolling Stone

[ad_1] Andrew Callaghan — host of YouTube channels All Gas No Brakes and Channel5,...

[ad_1] Janelle Monáe was presented with the SeeHer Award at the 28th annual Critics...

[ad_1] Snag a pair of good-quality noise cancelling headphones with 20 hours of battery...