MISS USA 2022 R’Bonney Gabriel has positioned herself as one of the favorites to snatch the Miss Universe crown on Saturday.

The fashion designer from Houston made history when she became the first Filipina-American to win Miss Texas USA.

“Oh my God, it’s an honor. I’m getting messages on Instagram and just social media of Filipina girls and women telling me they’re so excited, they’re so happy,” Gabriel told Houston Life following her win.

“They’re crying tears of joy because they are inspired to go after pageantry or something. Like I’m paving the way for them to just go after whatever they want, no matter what it is. So it’s an honor.”

The beauty queen has been sharing behind the scene content on her Instagram as she prepares for Saturday’s competition in New Orleans. 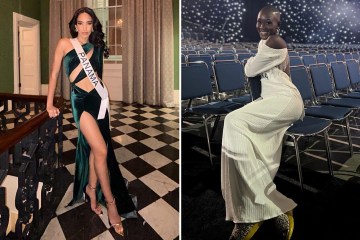 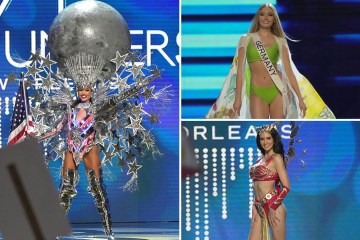 “I feel like I’m dreaming!! This week has been so inspiring to be among some beautiful women,” she wrote alongside several images with fellow contestants.

On Thursday, Gabriel stunned the crowd as she modeled a  “woman on the moon” look for the national costume part of the competition.

She said on Instagram the message she wanted to send with the look was to “dream big, shoot for the moon and achieve something out of this world.”

According to her Miss Universe bio, she loves to hula hoop, backpack, and read during her free time.

Gabriel earned a degree in fashion design with a minor in fibers in 2018 from the University of North Texas.

She first started sewing at age 15 and fell in love with the process of constructing things out of fabrics and textiles.

After college, she went on to intern for fashion designer Nicole Miller in New York City.

According to Gabriel’s bio, she is an “eco-friendly fashion designer, sewing instructor for domestic violence survivors, artist helping women learn tools for success, advocate for sustainability in the fashion industry.”

Her outfit for the Miss Texas USA opening number was a dress that she created out of a coat she found at a thrift store.

She often designs and crafts her own wardrobe for interviews and rehearsals and has shared a sneak peek of her outfit for the show with her Instagram fans.

Gabriel had been modeling for six years before joining the Miss Universe Organization.

Previous winners of the competition, now in its 71st year, have gone on to become leaders in medicine, politics, and business, among other achievements.

The winner will be crowned by the 70th Miss Universe — Bollywood actress Harnaaz Sandhu of India.